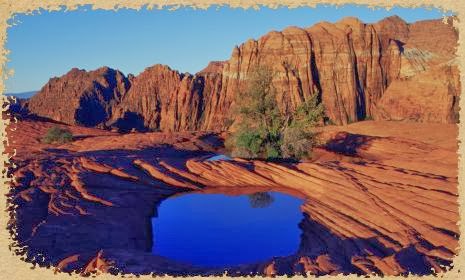 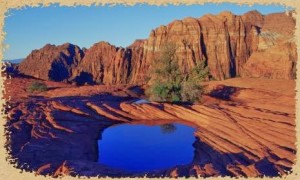 Renae Stucki Realtor wants to take a moment and introduce you to another wonder of the Southern Utah area.  Snow Canyon!  Snow Canyon State Park is a state park of Utah, USA, featuring a canyon carved from the red and white Navajo sandstone in the Red Mountains.  the Park is located near Ivins, Utah and St. George in Washington County.  Other geological features of the state park include extinct cinder cones, lava tubes, lava flows and sand dunes.

Snow Canyon is named after early Mormon settlers Lorenzo and Erastus Snow.  It was designated as a Utah State Park in 1958.

Two canyons, West Canyon and Snow Canyon, begin side-by-side at the north gouging deeply into the sandstone of the Red Mountains, each canyon then running southward, slowly converging then finally meeting in the middle of the park.  From there Snow Canyon continues south-by-southeastward as a single, larger canyon.  Near the park’s southern entrance, the canyon ends, its mouth opening into the Santa Clara bench near Ivins, Utah.

The park boundaries extend northeastward, across State Route 18, to encompass two cinder cones along the western edge of Diamond Valley.  A paved two-lane road (formerly SR-300) enters the park from Ivins on the south, winds up the canyon a bit, then climbs up the eastern edge to the bench above Snow Canyon, where the road joins State Route 18.  Ancient lava flows spill over the eastern edges of Snow Canyon from above, where the road climbs out of the canyon.

The highest point in the park, according to a U.S. Geological Survey topographical map, is a peak 5,024 feet (1,531 m) in elevation nearly due west of the southern cinder cone, standing above the eastern edge of the east fork of Snow Canyon.

Snow Canyon sits at the junction of the Mojave Desert, Great Basin and Colorado Plateau.

The climate is typical for a desert.  Higher elevations tend to be dry and cooler.  Lower elevations are also dry, but much warmer.

Created in 1958, Snow Canyon has a long history of human use.  Ancestral Puebloans inhabited the region from AD 200-1250, utilizing the canyon for hunting and gathering.  Paiute Indians used the canyon from AD 1200 to the mid-19th century.  Mormon pioneers discovered Snow Canyon in the 1850s while searching for lost cattle.  The canyon has been the site of Hollywood films such as Butch Cassidy and the Sundance Kid, The Electric Horseman and Jeremiah Johnson.  Originally called Dixie State Park, it was later renamed for Lorenzo and Erastus Snow, prominent pioneering Utah leaders.

The vegetation of the area mainly consists of desert plants such as cresosote bush, scrub, yucca, flowering and non-flowering cacti and sagebrush.

Wildlife in Snow Canyon includes three endangered species: the Gila monster, Peregrine Falcon and Desert Tortoise.  Small fences to keep the ground-dwelling creatures from accidentally wandering onto roads can be seen across Snow Canyon and the St. George area.  Other notable wildlife include the giant desert hairy scorpion, coyote, Mojave sidewinder, red-spotted toad, Utah banded gecko and the side-blotched lizard, among many others.

Whiptail Trail – 6 miles is an easy trail.  Level with some slopes, it’s accessible to physically challenged individuals.  Tucked along the canyon bottom, this sinuous paved trail is suitable for hiking, jogging, biking and rollerblading.

Johnson Canyon – (Open November 15 to March 1 only) – 2 miles.  Easy, level with some rocky slopes and steps.  Boasting the only riparian area in the park, this trail winds through lava flows and red rock to an arch spanning 200 feet.

Sand Dunes – Half mile easy.  Deep sand with some slopes.  Trail leads to a large expanse of red sand that is an excellent play area for children of all ages.

Butterfly Trail – 2 miles, moderate.  Some steep slopes, steps and uneven surfaces.  Winding along the west side of Petrified Dunes, this trail leads to West Canyon Overlook and lava tubes.

All of this information was taken from the Wikipedia website.  You can do a google search to learn more about his incredible canyon.  Click on the photo at the top to visit the official website for the canyon.

And then call Renae Stucki!  Let her help you relocate to Southern Utah and experience this incredible area for yourself.  She’ll make your dream home come true!